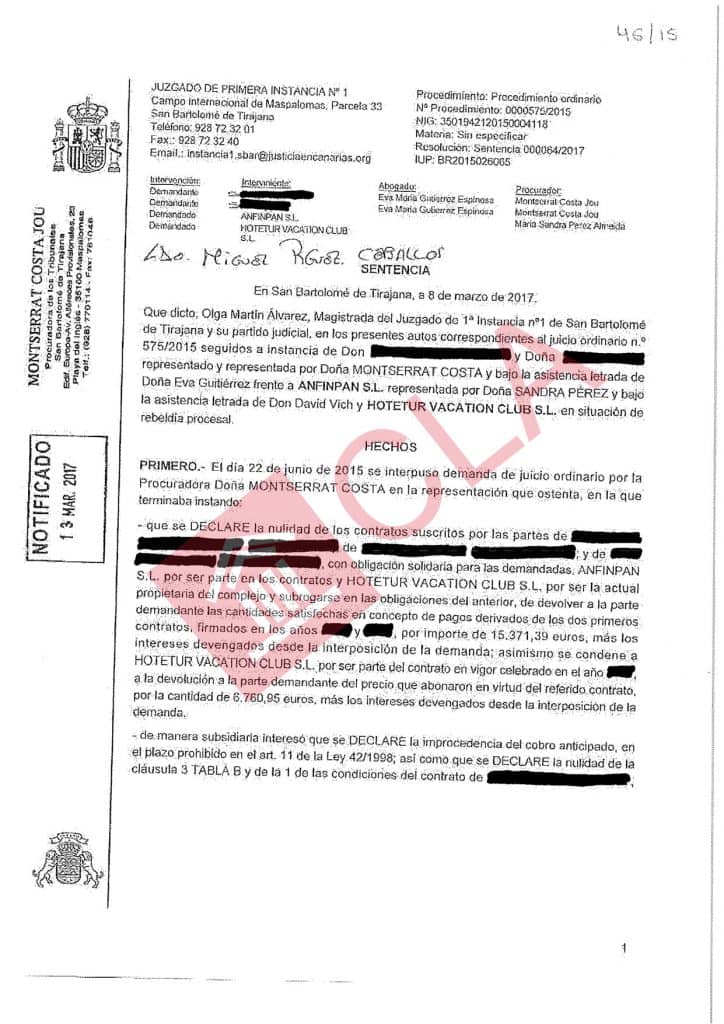 FIRST INSTANCE JUDGE SEES NO NEED FOR A TRIAL.

In January 2000, our clients were approached by a woman on the street who was offering free scratch cards with different prices. Much to their surprise they were told they had won cigarettes and alcohol, the condition being they would have to attend a short presentation. As our clients arrived at the resort they were shown around the grounds and explained the benefits of owning a timeshare week. Our clients were then later moved to a room were a finance arranger explained how much a week would cost and how this could be paid. After several hours stuck inside a small, hot office, our clients felt they were pressured into signing a contract then and there. They were even persuaded into taking out an extension on their house mortgage to pay for the week. Whilst our clients did use the apartment for a couple of years they felt that they had been misled as certain promises were not being kept, two which stood out were the lack of exclusivity as well as the disastrous exchange program.

Disheartened with the treatment received by Blue Bay (Airtours) our clients searched for a way out. After seeing Canarian Legal Alliance numerous successes they decided to place their trust in them and in 2014 initiated a claim against Blue Bay (Aitours). By 2015 our clients case was presented at court and simultaneously accepted. A preliminary hearing was set by the judge in early 2017, who examined the evidence and decided a trial was not necessary. The judge declared our clients contract null and void and ordered the return of 15,050€
Resort Infraction & Sentence Summary
Just as in many of previous First Instance sentences, the judged based her decision on the recent Supreme Court sentences. In this case our clients contract was in perpetuity, meaning their contract was valid for an unlimited period. Not only did she rule taking into account the Supreme Court stance on the Spanish timeshare law of (42/98), but she even we as far as to see no need for a trial.
This is a clear indication of the impact which the plentiful Supreme Court sentences are having on the lower courts, not only in Gran Canaria but in the whole of Spain. The Supreme Court has been more than clear in their decisions and have no set a precedent for all lower court to follow.