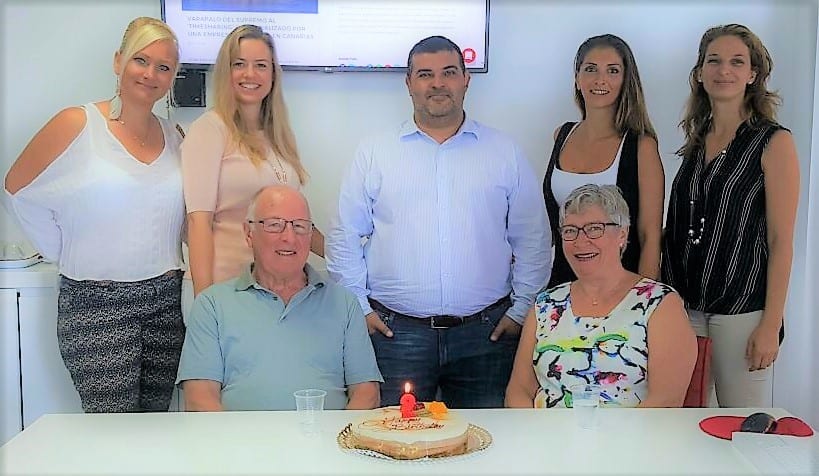 We would like to wish a very Happy Second Anniversary to Supreme Court Sentence 774/2014, who has recently reached the age of two years old. At such a young age it has already changed the lives of  of so many clients at Canarian Legal Alliance, who has benefited  from this rulings as being a jurisprudence.  We could not imagine a better way of celebrating this anniversary than with a wonderful cake shared with Mrs Grimsbo, our client whose case made legal history in Spain.

The ground breaking Supreme Court Sentence 774/2014 has been notified to us on the 3rd of March 2015, when the announcement was made that our Norwegian client Mrs Tove Grimsbo, had won the first ever ruling at the Supreme Court in timeshare related issue.

Her story began when she bought a timeshare week in Anfi, but then realized that the promises haven’t met reality. So she enlisted the help of a local Arguineguin law firm, who studied her case and found many breaches of the timeshare law.

It took several years of court cases and appeals, until eventually it went before the Supreme Court, who found in favour of Mrs Grimsbo against Anfi.

Since this time the floodgates have opened, with many more cases going before the Highest Court in Spain. To date, there have been 48 judgement passed by the Supreme court against various timeshare resorts in Spain, placing many of their rulings into jurisprudence. It has ruled on many aspects of the timeshare law, which came into force in 1999.

The court has confirmed that the taking of deposits within the cooling off period is illegal, even if made through a third party. They have also confirmed the time period that a contract can last, this is set at a maximum of 50 years as per the timeshare law.

Since then, other factors have been added, floating weeks  have been deemed illegal, affiliation to clubs declared to be fallen under the timeshare legislation. The criteria used by the Supreme Court included the fact that no specific apartment number or date was given to the clients when they purchased their timeshare in these cases.

Along with these rulings, there have been many heard by the Courts of First Instance and High Courts. These lower courts have used the rulings in deliberating the cases before them, finding for our clients and awarding them many thousands of euros as well as declaring the contracts null and void.

So there we have it, in two years the face of timeshare law has been completely changed in favour of the consumer, having declared more than hundred timeshare contracts null and void and ordering timeshare resorts to return to our clients over   3 million Euros , of which we already paid out over 1.2 million euros!

We would like to thank all those clients who over these years have put their faith, trust and patience in Canarian Legal Alliance. Also a very big thank you to all the team at CLA for your hard work and efforts on behalf of these clients.